Sanda vs Muay Thai: which style is more effective in a fight?


Sanda vs Muay Thai: strong and weak points of each style

Sanda, also known as Chinese boxing, is a hybrid martial art based on Kung Fu with elements of kickboxing and wrestling.

Muay Thai, on the other hand, is based on a set of traditional Muay Boran techniques with a heavy influence on Western boxing.

Let's take a look at what makes each of those respective styles unique. And which one provides fighters with a better set of skills for stand-up fighting? 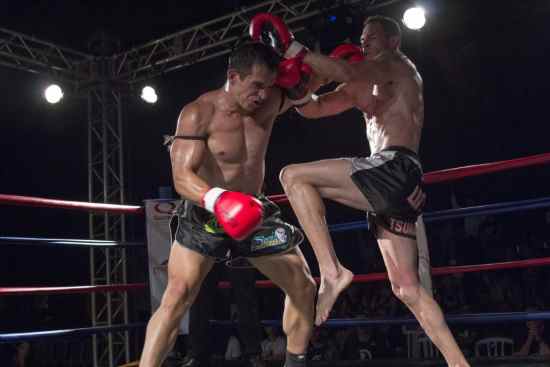 Sanda [Sanshou] is not a very popular sport outside of China. Not many people trains this martial art around the world. That means that there is a low competition level and a small pool of talents to choose from.

This situation isn't very helpful in training pro fighters that could successfully compete in the ring. The level of training doesn't allow most of them to compete with the best in MMA formula or K1/Glory ruleset.

This is, in my opinion, the major weakness of Sanshou. It is not a set of fighting techniques or a training methods that stop the expansion of Sanda. It is a lack of following and top level competition that makes Sanda weaker than Muay Thai or Dutch Kickboxing.

Sanda vs Muay Thai: cons and pros of each respective style

In theory it would seem that Sanda is more suitable for MMA competitions than Muay Thai since it utilizes throws and takedown. And a Muay Thai fighter needs to learn a new skills to get a similar level of a takedown defense to fight in the cage.

But the opposite seems to be true. There's a lot of fighters with Muay Thai background competing in MMA and there is no significant number of fighters with Sanda background. Again, low popularity and a lack of healthy competition may be blamed for that fact.

Muay Thai has a very tough and competetive selection process so becoming a professional MT champion means a lot. And those who reached the top are one of the toughest stand-up strikers in the world.

Read Muay Thai in MMA to learn more about it.


The rules and regulations:

Another reason of a low popularity of Sanda may be the ruleset. Each big formula like UFC, Strikeforce, K1/Glory has it's own ruleset that favor some martial arts over the others.

This also applies to Muay Thai to some extent with its scoring system. Muay Thai, however, blends well into K1/Glory formula. And with added takedown defence techniques it also formed a sizeable pool of stand up strikers and champions in MMA competitions.

Sanda, on the other hand, doesn't seem to blend well in those formulas. Rules, like pushing the other fighter out of the ring for getting extra points, doesn't benefit developing skills that may be effective in MMA.

Sanda fighters tend to keep their chins up and a neck straight. This weakness may be easily exploited by Muay Thai fighters with solid boxing skills.
I'm not saying that Thai fighters are champions at head movement cause that's not true. This seems to be one of the greatest weaknesses of every Asian martial art when compared to Western boxing.

My last point is that Sanshou relies on forms. I wrote about a major weakness of forms in Karate vs Muay Thai post.

In short: in my opinion practising forms is an obsolete form of training. It doesn't benefit fighter as much as a solid technical sparring session with a skilled opponent.