Muay Thai vs BJJ [Brazilian Jiu-Jitsu]: Pros and cons of each style

Brazilian Jiu-Jitsu is a grappling style and Muay Thai is stand-up striking martial art. Both systems are utilized in MMA competitions.

In the early days of the MMA, BJJ was very dominant thanks to Royce Gracie and his exceptional grappling skills. And later on, Muay Thai has become a popular stand-up striking style sported by a fighter like Anderson Silva, Jose Aldo or Joanna Jedrzejczyk.

Since then most of the top contenders have started to train both: stand-up striking, predominantly Western Boxing and Muay Thai and grappling techniques like Bjj and wrestling, to become more versatile fighters. 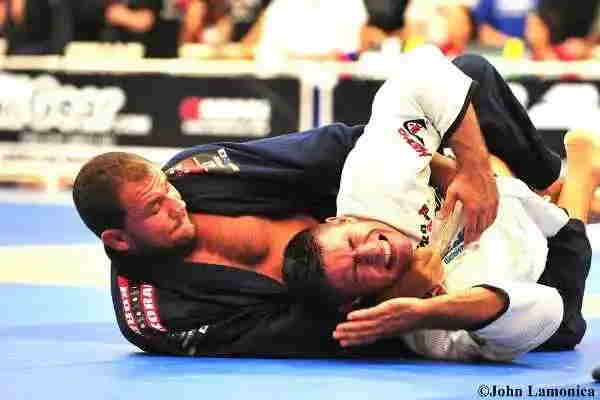 Brazilian jiu-jitsu is focused on grappling and it doesn't include any stand-up striking techniques. Muay Thai, on the other hand, focuses on kicks, elbow and knee strikes and punches and occassionally getting into clinch fight. But it doesn't teach nor allow any ground game or a takedown defense.

Those two styles compliment each other more than anything else and are not meant to compete with each other. And once they do it is not very spectacular to watch it.

It's like comparing a sniper rifle and a shotgun: both are lethal weapons in their own way but build for a different purpose and with a different range of effective damage inbuild. Jules from Pulp Fiction would say: "It's not the same ballpark, it ain't the same league, it's not even the same game".

It only makes sense when both fighters have basic skills in both styles and then competes with each other.


Muay Thai vs BJJ: how would it look like in a real fight?


Let just assume that both guys with different fighting backgrounds - one with pure Muaythai and another one with Brazilian Jiu-Jitsu skills - wanted to fight each other. What would happen next?

Thai fighter would most likely keep him in distance smashing his face with devastating kicks and punches. BJJ fighter would not have any skills to block or deflect Muay Thai strikes. And that would be it. End of the fight - KO or TKO in the best case scenario.

But then it could go the other way around. BJJ adept would quickly grab a Muaythai fighter and throw him on the ground. And then he would trap him with a spinal lock or an armbar. In this case, Muay Thai fighter would be helpless not having any effective skills to fight in this position and to counter a submission attempt.

Most likely he would get choked and pass out. This could more likely happen on the street and not in the ring where speed and mobily would be on Muay Thai fighter's side. But it's still possible that Bjj adept would trade a few blows from Thai fighter just to get a takedown.

So I guess it all boils down to the level of Muay Thai guy takedown defense since he would have a tremendous advantage fighting in a stand-up. That means a fighter would have to learn some more skills outside of his regular style. Another factor would be how fast and agile is a Bjj guy at taking someone down. And how many strikes he can withstand in the process of doing so.

Muay Thai vs Bjj: a summary


Muay Thai is very effective in a stand-up striking and Bjj is an excellent grappling style. In my opinion, both styles perform best when combined. This approach helps to make a complete fighter, capable of fighting both in stand-up and on the ground.

When you can choose whether you want to fight on distance, in a clinch or on the ground you can deal with any situation in the ring.


Have you got your own opinion about Muay Thai vs Brazilian Jiu Jitsu? Share it in the comments below: