Traditional Muay Thai punching techniques were initially very limited with straight jabs and circular punches being the most utilized strikes.

It all changed at the beginning of the XX century with a globalization of Thai kickboxing. Western boxing techniques have started being adopted and this has transformed traditional Muay Thai into a modern sports Muay Thai. 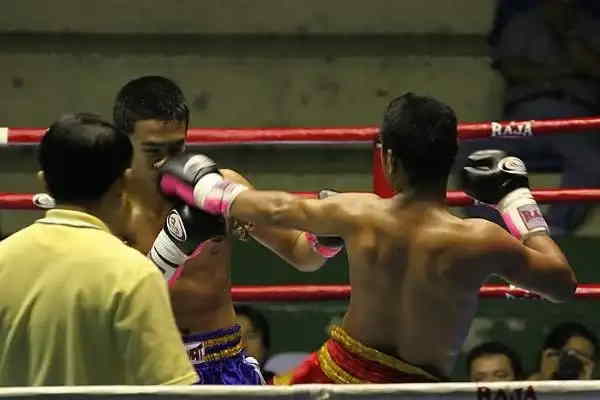 
In Muay Thai gyms in Europe, more esteem is put on western boxing techniques. Traditional Muay Thai punches are being learned to respect a rich history and traditions of Muay Thai.

But even the most gyms in Thailand are focused heavily on teaching western boxing punching techniques.
The reason is simple: those strikes are more powerful than traditional Muay Thai punches.

Most of the Muay Thai taught in Western gyms is a hybrid version of Thai Kickboxing. This means that a traditional Muay Thai arsenal of punches is augmented by uppercuts, overhands and shovel hooks.

Since we are on the subject of punching, an important thing to do when you start training is to pick a proper Muay Thai gloves. Don't forget to protect your hands and wrists with hand wraps when doing heavy bag drills and sparring.

I know from my own experience that wearing a proper gear makes a lot of difference.

A list of main types of Muay Thai punches:

The main purpose of a jab is to measure the distance between the fighters during a fight.
It is also a very good tool for setting up a combo.
You can use it to compromise your opponent's guard and open the way for a more powerful strike: be it a cross or a head kick.

Jabs are also very effective as a defensive weapon. With the right timing, you can stop a charging opponent and unload a counter-attack.


Cross is more powerful than a jab since it is usually being thrown with a dominant hand. And because you have to swing your body when throwing it which adds more power to the punch.

To throw a cross punch relocate weight from your rear foot to your front foot and thrust your shoulder forward. Then twist your hips to maximize the punching power.

Use it to strike your opponent's face and his torso.
To use it effectively in a fight you need to set it up first.

The most popular setup combo starts with a jab and then follows up with a cross. You can also start with a left low kick and then land a punch with your right hand.

Uppercut targets chin, the most vulnerable [to KO] part of ones face. It is a powerful close-range weapon.

Uppercut is useful only at a very close range. It is not widely used in traditional Muay Thai fight due to neck wrestling and other clinch fighting techniques.
It is more popular in the K1/Glory formula which allows only minimal clinching and no elbow strikes. When telegraphed, uppercut may be effectively countered with a cross punch.
A hook is used to target gaps in your opponent's defense. Whenever you see that his guard is low, it is the right moment to throw a hook.

Aim for his chin - is a "natural" target for this type of a punch. But also don't forget to deal the damage to his rib cage with shovel hook whenever you spot an opportunity.
If your opponent holds his guard up, a few strong hooks to the body will make him to lower his guard and to expose his face.

The hook is a mid-range strike that possesses an explosive knockout power. To throw a powerful hook don't forget to twist your back and shoulders to increase the punching power.

A superman punch also known as cobra punch is a very powerful and spectacular punching technique.
Superman punch is performed by fainting a kick and then jumping towards the opponent and throwing a cross punch instead.