How to deliver a proper Muay Thai low kick


Muay Thai low kick is one most effective weapons in Thai kickboxer's arsenal. Leg kicks serve one main purpose in the ring and that is: wearing down your opponent by damaging his leg.

In this post, I will share with you a few useful tips on how to throw an effective low kick. I will also tell you how to protect yourself against getting tagged with leg kicks. 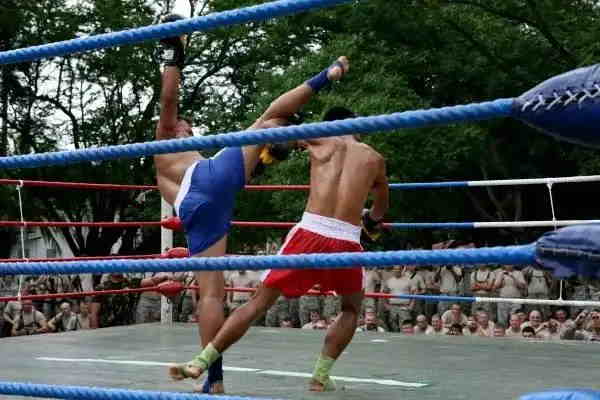 
Leg kicks can slow down your opponent and slow him down in the ring. It may not look like it at the beginning of the fight, yet the accumulated leg injuries will take its toll in the later rounds.

It is especially important to utilize low kicks when fighting a fast and agile opponent. The one that prefers to circle around you while striking from different angles.

Throwing low kicks is also a safe way of engaging your opponent from a distance. This way can engage him without opening your guard and getting into a short-distance exchange.

If you still have doubts about the effectiveness of a leg kick you should watch this classic fight between American kickboxing champion and professional Muay Thai fighter.

This Muay Thai fighter has totally destroyed the champ using leg kicks ONLY:

Unless he is ambidextrous and can easily switch his stance during a fight, his back leg is going to be much softer and prone to get injured.

A tip #2: When you throw a low kick don't make a newbie mistake by holding your arms down. That mistake will leave you open to a devastating counter-attack. You may get head-kicked or at the very least you will eat a hook. Always keep your hands up.


Here's a list of leg kick combinations that you can practice on your own and with your sparring partner holding Thai pads for you.


This is how can you defend yourself against Muay Thai leg kick:


"Checking" leg kicks is the best way of defending yourself against them. This not only allows you to absorb the damage with your shin but it also gives you an opportunity to damage back your opponent's leg.

It may even end the fight if the attacker suffers a massive damage to his leg. That's exactly what happened in the UFC fight between Chris Weidman and Anderson Silva: