I have picked them while training and sparring in the UK and in Thailand. I want to share with you those that I have found the most useful. 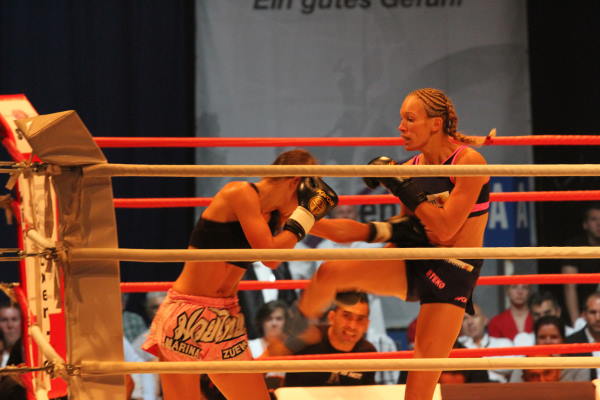 There's no point of perfecting a combo that you are not 100% sure about. You won't be able to rely on it in a real fight.

Find your strong and weak points and use combos that work well for you. It cannot be forced, it must come naturally to deliver a sequence of strikes.

Ideally, you should perfect combos that utilize your most powerful strikes - be it a head kick, a hook or a knee strike and not making yourself too vulnerable to counter attacks at the same time. Keep it simple, keep it real.


In most combinations first few punches are meant to open your opponent's guard for further strikes:

Since modern Muay Thai punches are based on Western boxing strikes most of the combinations start with a simple jab+cross combo which may be a little predictable. That's why you should try more tricky moves from time to time:

And now my special move. I call this one an ex-girlfriend cause it's really nasty:

It is very useful for a shortening of the distance between you and your opponent and getting into a clinch.


It is not a problem if you cannot memorize all of them at once. Just write them down and stick it to the wall at your gym right behind a heavy bag.

Next time when you start your bag routine perform them one after another and pick the most useful ones to practice with your sparring partner.

I hope you have found it useful. Let me know what you think and share a list of your favorite combinations in the comments below. Also, check a post about how to choose a proper Muay Thai gear.

If you are looking for more lists of combos take a look at: