I will list an effective Muay Thai combinations in this post. This time I will focus on Punch+Kick and Kick+Punch Muay Thai combos.

Most of them will be simple 3-count and 4-count combos that you can start using right away.
I have also added a few advanced combos and setups for more experienced fighters.

I'm writing them from a position of an orthodox fighter with a regular stance ie. left lead leg. You can easily adjust them for a southpaw stance. 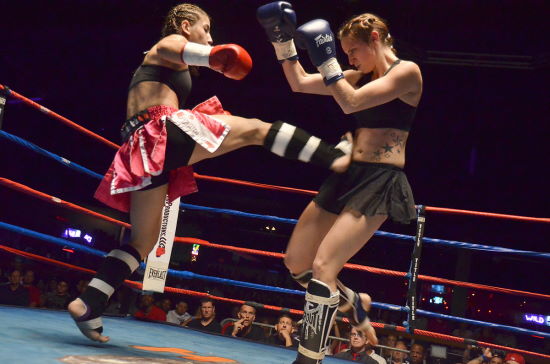 
Most of these combos are great for heavy bag drills and sparring. Some of them - like double switch kick combos - are meant to be used for training with Thai pads and are not meant for regular sparring.

For a list of Dutch style combos take a look at: Dutch Kickboxing combinations.


Try them and choose the one that feels natural to you. Everyone's got different preferences. Most of the combinations start with a simple jab or a low kick. Some people like to start combos with a straight right punch - I don't.

At least not too early in the game. It feels like it opens up my guard too much and it neutralizes my 'power punch' that I could use for a counter-attack. I like to keep that punishing 'answer' for my opponent's attacks early in the game and open up later in the fight.

You can always do some more cocky strikes later on when the situation allows you to. Other people may feel different about it so you should try them before you decide what's the best strategy for you there. Try these simple 3 count combinations starting with a cross and check it for yourself: