Julie Kitchen is the Queen of Muay Thai. Period.

For many years she was the female face of Muay Thai in the United Kingdom and in the US. A multiple World Champion, she is more of a technical fighter than a knockout finisher.

She has accomplished a lot in the sport yet she remained a very modest and likable person. That is a very refreshing attitude when compared to some of a recent UFC female fighters and their public behavior.

Although she is 15 times World Champion in both Muay Thai and Kickboxing she is very feminine and values a family life. This proves that you can be a badass in the ring and a nice person outside of it. 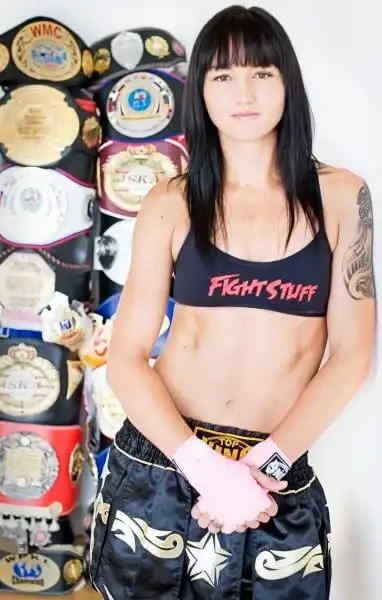 
Believe it or not but the future multiple World Champion in Muay Thai and Kickboxing hasn't started training until the age of 23.

She was also married and had two kids already. Julie has started working out to lose weight after the pregnancy in 1999. She picked up Muay Thai and three years later in 2002 she had her professional fight which she won.

In her own words: "People say I'm a natural, I'm not a natural. I've worked really hard, had great training and overcome a lot"

She is noted for her great arms reach which makes her natural striker and allows her to deliver powerful elbow strikes. She generally likes to keep the opponent on distance with kicks and punches and to fight outside of the clinch.

Her career achievements include multiple Muay Thai and Kickboxing World Champion titles like:


And her fight record is also impressive with:

Julie's coach, and her husband is Nathan Kitchen who is a professional fighter himself.

During her career, she has fought with such established fighters as Claire Haighl, Miriam Nakamoto, and Amanda Kelly. My only regret is that she hasn't fought Joanna Jedrzejczyk in her prime cause that would be a spectacular fight to watch.

Julie Kitchen has contributed greatly to a popularization of Muay Thai in the UK and in North America. Thanks to her unique personality and her fighting skills in Muay Thai has become more popular in the US.


Julie Kitchen's career after the retirement:


Julie has officially retired from fighting in 2012, a month after the fight with Amanda Kelly. She has retired as one of the best Thai kickboxers in the world.

After the retirement, she took a position as a sports commentator for the Enfusion kickboxing promotion. She also travels around the World meeting with fans and promoting Muay Thai worldwide.

Both of her daughters: Amber and Allaya are Muay Thai fighters too.


Read about other influential Muay Thai fighters and Kickboxers: